Celebrity for a Day

Well, my article went viral.
Great. Now I can check that off my list.

The reporter from the New York Post nearly orgasmed when I assured him it was true. The reporter from Metro NY said, "I wish 100,000 people saw something I wrote." My article was discussed on Inhabitat and Gothamist. Mayor Bloomberg and Ray Kelly both publicly dismissed my article, and even the New York City Department of Transportation had to make a statement on their Facebook page (below) to clear up any confusion. Over 250,000 saw it. It was really a wild couple of days.

... but nothing in my life has changed. I did not make any money off of this. I did not get a gig writing for the Onion. Edward Snowden did not call me. I will not be on Letterman tonight. Yet it feels good that so many people reacted to an idea that I came up with. It wasn't a hoax. It was a not-so-far-fetched story based on an exaggeration of reality. It was a clever idea and feasible enough that quite a few people thought it was real. I now know the secret of going viral. Where do I go from here? Hopefully someone will realize that social media prowess is powerful and find a way to turn one of the hardest-working comedians in New York City into a media cash cow. At the very least I will laugh anytime I see a Citi Bike. I'll always have this moment in time to look back on and feel good about the fact that what I wrote had an impact on people.

I was talking about it with a friend on the bus and a woman turned around and said, "are you guys talking about the cameras on the CitiBikes? My friend in Albuquerque told me about that..." I laughed for about an hour.

Here are a few of my favorite posts... 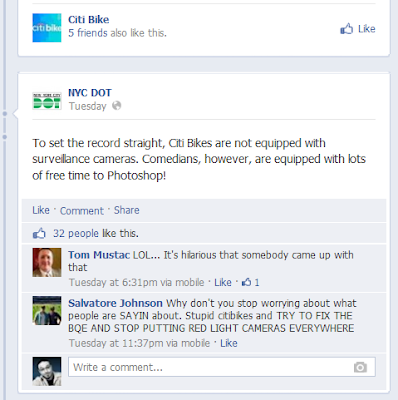 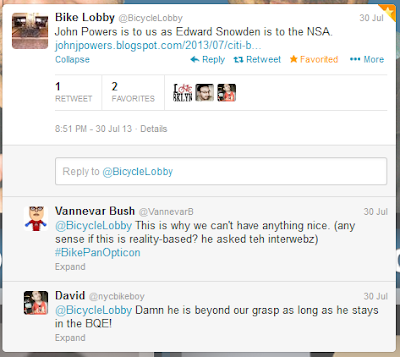