An apparent follow-up craze to the "Knockout Game," has finally arrived in the Big Apple. Pedestrians in New York City have recently taken to flicking cigarettes at people walking by. These butt-snipers are now being referred to as "Flickers." Reports of "Flicking" have spread throughout the five boroughs. It seems there is no clear motive for the attacks. Instead of discarding a cigarette butt in the proper receptacles or adding to the litter in the streets, these assailants take a lit cigarette and flick it at an unsuspecting passerby. The Flickers seem to attack indiscriminately and even haphazardly. 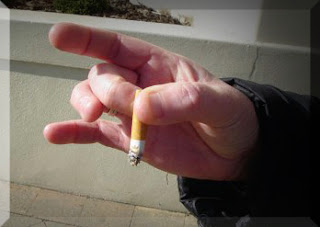 They appear to be ordinary smokers, about to finish a cigarette, but then it flies your way. Attacks range from point-blank range at 2 feet to an impressive 10-foot fling by highly skilled Flickers. There is no pattern to the type of cigarettes being flicked either. It seems like these sidewalk terrorists are seeking to punish the city that has shunned them. A report filed by one Flicker (who refused to be identified) informed this reporter that, "(Mayor) Bloomberg has done everything in his power to make this city uninhabitable for smokers. We can't smoke in bars or parks but we can still smoke in the streets and if I see the Mayor I'm going to flick my Newport right at him."

At least 25 people have been targeted by Flickers in the past several months. Anita, a 24-year old fashion student living in Tribeca, claims to have been the victim of a Flicker last Friday night around 2am. When I asked about the encounter she told me,


"I was walking down 2nd avenue and a guy walking towards me was smoking. As he approached he took one last drag from his cigarette and then flicked it right at me. It landed in the hood of my jacket. I had to take my jacket off and find the damn thing. My friends were laughing hysterically. I wasn't hurt, but it left a pretty serious burn mark."

While clearly not as serious as being punched from behind, cigarette Flicking poses a very serious danger to pedestrians. A lit cigarette is a fire hazard and should be disposed of properly. Human hair is highly flammable, as is most clothing and millions of cigarettes are consumed daily in Manhattan alone. There is not much that can be done about this problem, but local police are aware of the situation. Mayor-Elect Bill De Blasio had this to say, "We always knew smokers were terrible people. It doesn't surprise me at all that these Flickers think they can get away with hurting innocent people."

New York has been the target of several violent trends, the latest being the Knockout Game. It has many people looking over their shoulders. Well, the next time you walk past someone smoking... make sure to give them space. If they are done with their smoke it just may come your way. You will probably not end up in a hospital but you may have to purchase a new scarf.


Posted by Unknown at 1:17 PM No comments: Links to this post